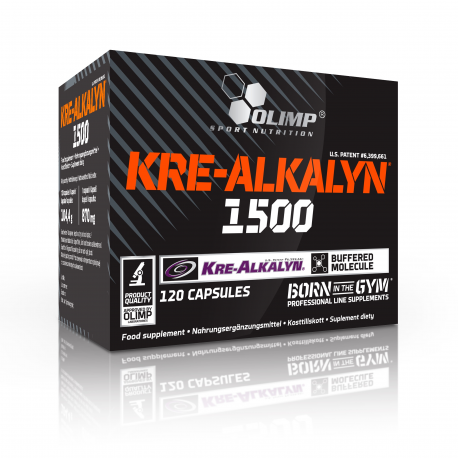 By buying this product you can collect up to 2 loyalty points. Your cart will total 2 points that can be converted into a voucher of 0,20 €.

OLIMP KRE-ALKALYN® 1500 is a patented form of creatine monohydrate of high bioavailability which replenishes creatine resources in muscle tissue much more effectively than ordinary monohydrate. It stores and transports phosphate groups for the purposes of protein synthesis and muscle fibre contractions. As early as the first half of the 19th century, the discoverer of creatine, Justus von Liebieg, observed that in solutions it is always accompanied by creatinine. This issue was explained to some extent by scientists in the 20th century, but full comprehension of this subject was achieved only in the 21st century. Creatine is a viable substance and creatinine constitutes its inactive, waste metabolite. Creatine is responsible for the contractions of muscle fibres and approximately 10 subsequent stages of the protein synthesis of these fibres. Consequently, it is considered the most effective substance supporting physical effort and facilitating the growth of strength and mass. Since 1992, when creatine became the most popular dietary supplement for athletes, the problem of its metabolite – creatinine – has increased. Indeed, creatinine is responsible for major issues related to the supplementation of the diet with creatine, such as subcutaneous water retention. Since the majority of creatine is converted into worthless creatinine immediately after being dissolved in a liquid or in gastric contents, the supplements containing ordinary creatine monohydrate provide little active substance to the muscles and their effectiveness is much lower than should be expected based on the ingested dose. Scientists have observed that hydrogen ions (H+) are responsible for the conversion of creatine into creatinine. The more of those ions left in the mixture with water molecules (H2O), the higher the acidity of the solution, i.e. the lower its pH is, since the acidity of the environment is measured by the negative logarithm of hydrogen concentration. Since the fundamental laws of nature state that each environment seeks balance, aqueous solutions strive to achieve the balance of proportions between H+ ions and H2O molecules. In the case of high acidification, i.e. a surplus of H+, H2O molecules are retrieved by the solution from all of the available sources. Creatine may be one such source, if it is present in the solution. In this case, the OH group is detached from one end of its molecule and the H atom is detached from the other end; subsequently, both components are bound and form the H2O molecule released into the solution. After the detachment of both of those molecules, the ends of the creatine become highly chemically active, reacting with each other and closing the molecule, i.e. converting it into inactive creatinine. This reaction, which results in a dramatic loss of creatine, is particularly intensive in the stomach, since the acidity of the stomach juices are particularly high. It does not decelerate considerably even after creatine is dissolved in clean water, since the H2O molecules themselves also disintegrate, creating H+ ions. The methods of protecting creatine from conversion into creatinine consist of either protecting its ends by bonding them with other substances, such as malic acid, or by mixing it with alkalis – compounds which remove hydrogen ions from the environment. The basic disadvantage of such methods is that the content of creatine in the end product becomes inevitably lower.

Krea-Alkalyn® pH Correct Creatine is the world's only patented form of pure creatine, which:
- does not undergo conversion into inactive creatinine in solutions and the stomach and does not store subcutaneous water
- does not require the charging phase
- is much stronger than ordinary creatine monohydrate
- guarantees incomparably better anabolic and ergogenic effects for a lower price.
Buying our OLIMP KRE-ALKALYN 1500 and OLIMP KRE-ALKALYN 2500 mega caps guarantees the following benefits