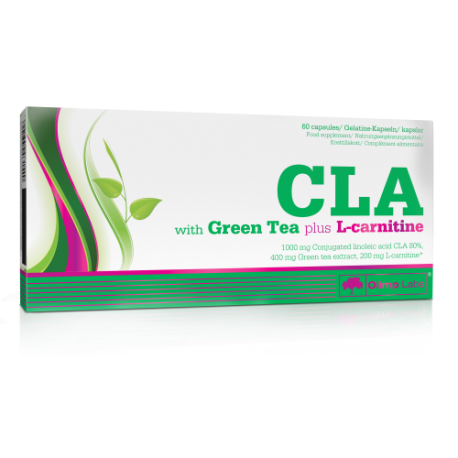 By buying this product you can collect up to 1 loyalty point. Your cart will total 1 point that can be converted into a voucher of 0,10 €.

A dietary supplement providing three of the most active substances to support the process of adipose tissue reduction, consisting of CLA, a green tea extract used as an EGCG, and l-carnitine. A carefully selected range of ingredients activates all phases of fat burning and simultaneously prevents the loss of body firmness. Several weeks of use of the supplement guarantees a visible weight loss, limits the risk of a yo-yo effect and results in a clear reduction in the symptoms of cellulite.

Why does the combination of CLA, green tea and L-CARNITINE support the slimming process so effectively?

Linoleic acid dienes, known as CLA, and specially isolated polyphenolic compounds found in green tea complement each other very effectively in the process of toning the figure. The green tea extract contains highly-effective bioactive substances which accelerate three important processes: initiating fat decomposition, supervising the efficient burning of fat in the muscle cells and preventing fresh storage in the fat reserves. The presence of CLA acids in turn is responsible for the complete destruction of fat cells, ensuring that they can never restore their loss. Moreover, CLA activates highly the process of creating new muscle proteins instead of replacing the lost fat. Consequently, the body becomes significantly more firm.

What influence has l-carnitine on the supplement's effect?
Why is the combination CLA & GREEN TEA plus L-CARNITINE more effective than the mere combination of CLA and green tea?

So far, many CLA preparations with green tea have appeared on the market, but it seems that their use in practice is not always so effective. This limited effectiveness results partly from the reduced activity of one of the metabolic reactions, for which carnitine is responsible in the body. Although green tea polyphenoles and CLA strongly support the fat loss process, this effect can be limited without the presence of carnitine. Carnitine determines the efficient transport of fats to the "combustion chambers" and improves the access to oxygen, which destroys them. Only the combination of CLA, green tea containing EGCG and CARNITINE can guarantee such a strong slimming effect.
Apart from a substantial l-carnitine addition, our preparation is unlike the similar, competitive ones as it contains a special green tea extract known as an ECCG. Only in this form, together with CLA, can they bring about correct and complete adipose tissue burning.

How does the dietary supplement prevent cellulite development?

In this respect the CLA fatty acids pay a special role. This extremely valuable nutrient supports fat loss and protects the muscle tissue as well. The adipose tissue reduction related to strengthening of the muscle structure results in a greater firming and strengthening of the skin and gives it a smoother and springier look. At the same time, CLA effectively protects from the accumulation of unsightly lumps of fat, especially in the regions around the thighs and buttocks. The effectiveness of this process is additionally supported by l-carnitine.

Who in particular should use this supplement?

This specially prepared preparation formula works in almost every case of being overweight. The supplement is especially recommended both during and after a slimming treatment. During treatment, the preparation not only dynamically accelerates the fat burning process, but it also prevents the loss of body firmness. However, after the treatment it limits the risk of a yo-yo effect. The supplement has an additional, very advantageous influence on the action of the heart and the cardiovascular system, and it can be also successfully used in cases of low physical activity.

How to use the Olimp CLA & Green tea plus L-CARNITINE supplement?

While undergoing slimming treatment, it is best to take 2

Content-Di day, either on an empty stomach or after the breakfast, or about 30 min before some planned physical effort (or supper). After achieving the expected body mass loss it is recommended that you continue to use the supplement for a minimum of 8 weeks, at 2 capsules every 24 hours, in order to prevent the yo-yo effect.