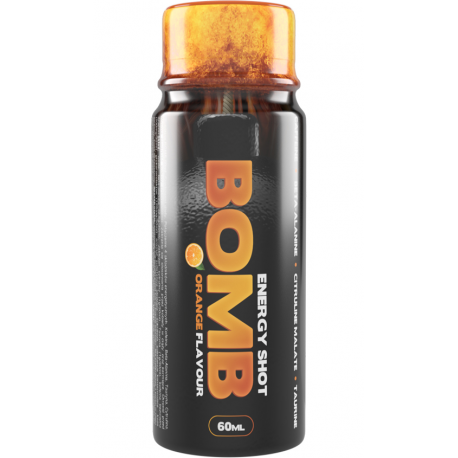 No reward points for this product.

Amazing shot preworkout based only on the active substances such as beta-alanine, citrulline and caffeine! It contributes to a significant increase in exercise capacity of the body and accelerates its regeneration!

7Nutrition BOMB is a quality product with a thoughtful and extremely effective composition. By using sufficiently high doses of active substances such as beta alanine, citrulline, caffeine and taurine all your activity will be made at 100% - even weaker day. Beta Alanine is one of the most studied substance, which affects the level of carnosine conditioning maintain full muscle function during intense work. Use this preparation before the workout and feel the prolonged effect of the explosion energy.

Beta-Alanine is an amino acid precursor and a building block of carnosine. Increases its saturation in muscle cells. Beta-Alanine strongly influences the ejection energy, which stimulates and awakens the muscle before training. It works like a sudden shock energy for your body.

Citrulline malate
Endogenous amino acid. Directly increases the production of nitric oxide (NO) even more affecting blood flow and vascularity (vascularity). With a solid dose of this amino acid you will feel extra muscle pump, and your veins will be more visible. Prolongs the action of other ingredients BOMB-a

Caffeine
Caffeine stimulates the central nervous system and increases metabolism, as such, is used both for food and medicine. Reduces the feeling of physical fatigue and restores the sharpness of mind in terms of weakness or drowsy mood. Caffeine affects mainly to a higher level of the nervous system, acting stimulant, increasing concentration and attention, helping to formulate thoughts and overall coordination body.

Taurine
The amino acid formed from methionine and cysteine. It is essential for the metabolic processes of proteins. It acts as an efficient conveyor components that build muscle tissue. 7Nutrition BOMB - free your potential!

BOMB-TAKE A LONG-LASTING AND FEEL THE ENERGY.

Use 1/2 bottle before or during training. Do not exceed 1 serving per day. Shake well before use. Consume within 24 hours after opening.