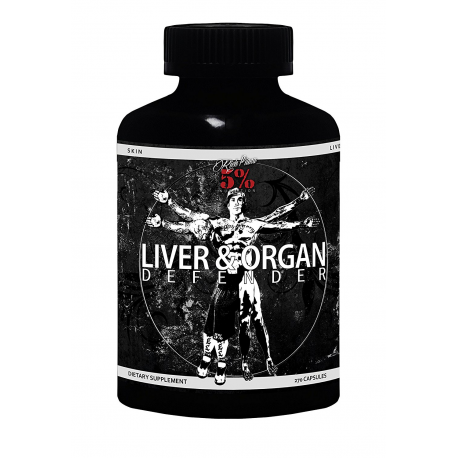 By buying this product you can collect up to 3 loyalty points. Your cart will total 3 points that can be converted into a voucher of 0,30 €.

Experienced bodybuilders know how important it is to protect internal organs, when our goal is to prepare a proper foundation to build a dream silhouette. Therefore, Liver and Body Defender is so necessary preparation in supplementation in the case of every hard training athlete. It is a mixture of large, and thus an effective doses of well-known to athletes supplements – antioxidants and herbs.

Milk thistle – it is known for more than 2000 thousand years natural supplement used for detoxification, as well as treatment damages, steatosis and cirrhosis of the liver and gall bladder disorders work.

Acetylcysteine (NAC) – it is a powerful antioxidant – it maintains a normal level of glutathione in the liver. It helps repair damages in the organism caused by free radicals. People who train hard, are more exposed to their harmful effects, so to figh against them is doubly important.

Glutathione (TwinTiger) – a low level of glutathione in the blood indicates a morbidity and means that the organism can not cope with the removal of free radicals, which damage cells in the brain and other organs. Additionally, thera are problems with digesting food and a decline in immunity.

Hawthorn fruit (HawthorneBerry) – it relaxes and dilates blood vessels, and thanks to that it facilitates the flow of blood. It is known in medicine since the nineteenth century as formulation supporting the heart. It also slightly lowers blood pressure, raised eg. as a result of weight gain.

Alpha lipoic acid (ALA) – is a well-known to athletes substance, which in this product lowers blood pressure and has a positive effect on the economy of insulin the organism.

Garlic (GarlicExtract) – it lowers blood pressure in the same way as they do drugs, but more gently. This facilitates the circulation of the blood and also reduces LDL cholesterol.

Magnesium – if there is a lack of magnesium in blood, then there immediately takes place an excessive influx of calcium into circuar muscle cells, and this causes the strong contraction – and as a consequence vasoconstriction of blood vassels and increased resistance to blood flow. A magnesium deficiency can also cause hypertension and cardiac hypoxia.

Coenzyme Q10 (CoQ10) is present in nearly every cell in the organism responsible for energy metabolism, but also the maintenance of a healthy cardiovascular system, including the heart. It sweeps out free radicals

Palma Sabal (Saw Palmetto) – phytosterols contained in it influence the process of transformation of testosterone to its stronger form – DHT. An excessive convertion to DHT leads to tissue damage, including prostate, and can lead to overgrowth or a tumor. Saw Palmetto works a bit like a synthetic drug – finasteride, which is an inhibitor of 5-alpha-reductase. Easing the conversion of testosterone brings relief to the prostate, prevents hypertrophy and facilitates urination.

An extract from the bark of the African plum tree (Pygeum) – it relieves symptoms associated with prostate enlargement and slows the effects of hypertrophy. It facilitates urination.

Chinese Cordyceps (Cordyceps Sinensis) – it is an ingredient from China with proven pro-health properties. It positively effects the urinary tract, and facilitates kidney functioning even in the case of patients who are undergoing dialysis.

Zinc – dihydrotestosterone (DHT) is an androgen, which is formed in the tissues as a result of the conversion of testosterone by the enzyme 5-alpha-reductase. As for the face and head, it is not a desirable effect since it is a cause of both androgenic acne and alopecia. Zinc prevents this conversion in a natural way. It reduces acne, protects hair roots, and has anti-inflammatory properties.

Selenium – is a trace element in the human organism. It is a powerful antioxidant and has a positive impact on many processes. One of them is the formation of acne. Selenium reduces it, increases the elasticity of the skin and soothes scars. It cleanses (detoxifies) the skin and eases inflammations.